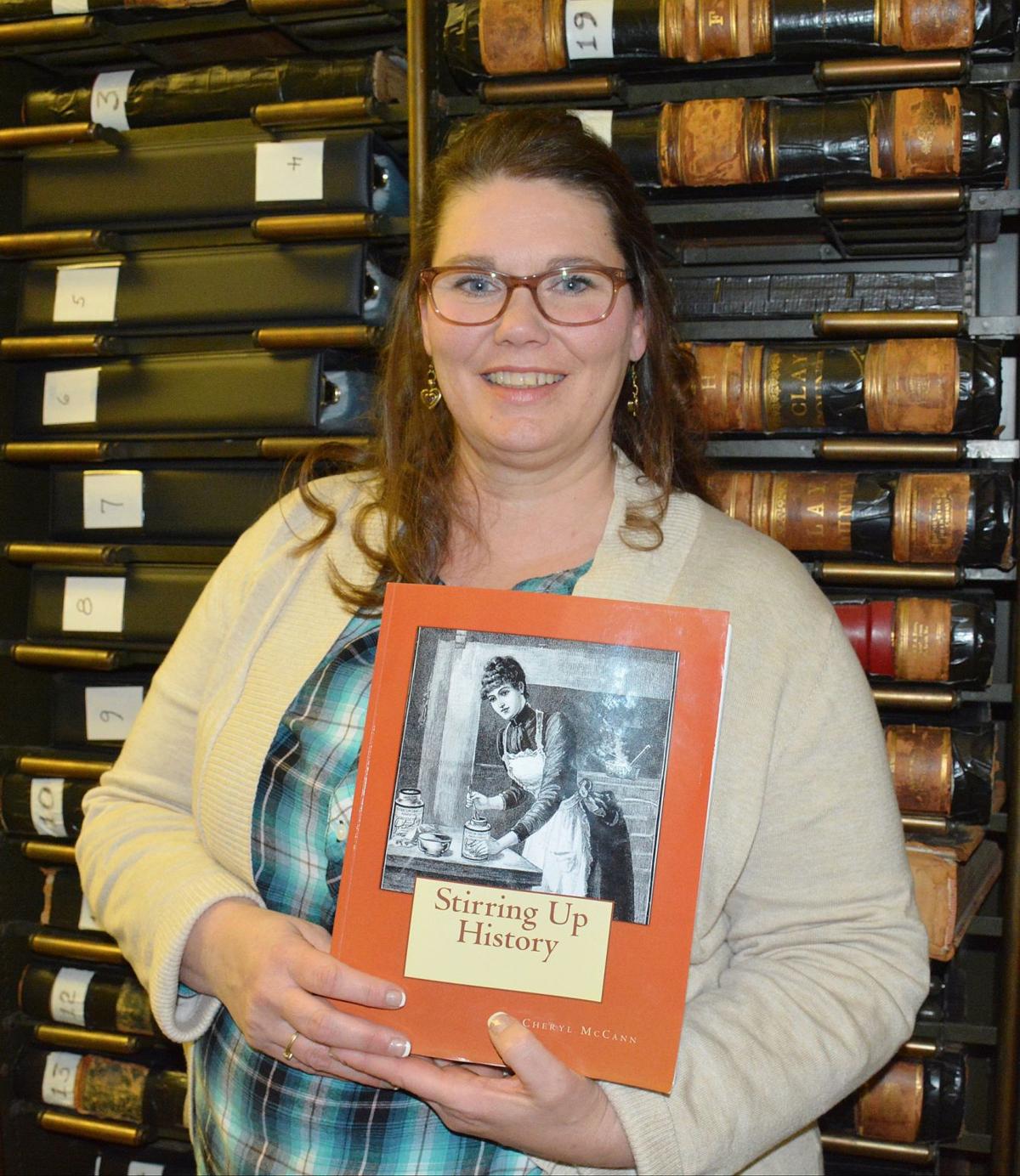 Author Cheryl McCann holds her first book, “Stirring Up History.” The book pairs the recipes printed in the century-old “Presbyterian Ladies of Liberty Economy Cookbook” with biographies of the women who submitted recipes compiled by McCann over two years. 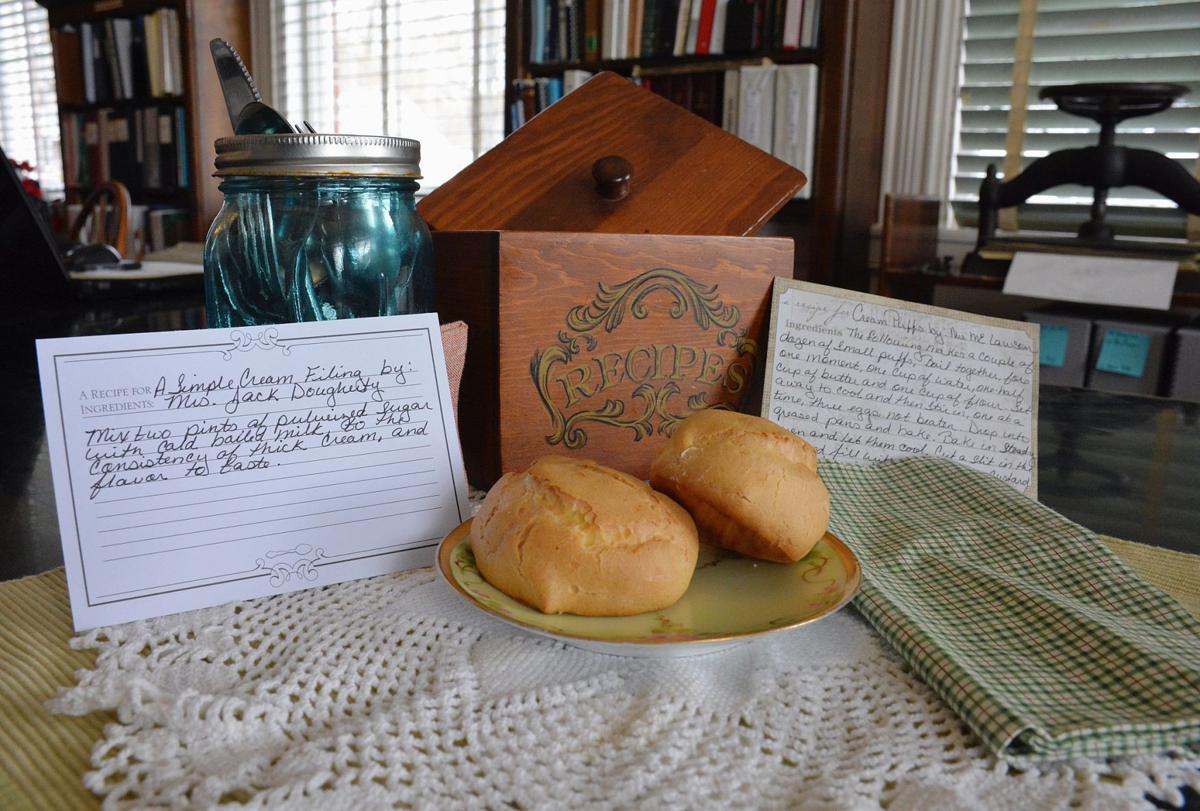 Cream puffs, created from recipes submitted by Katherine (Riley) Lawson and Gertrude (Peck) Dougherty for the 1880 and 1903 "Presbyterian Ladies of Liberty Economy Cookbook" are among recipes reprinted in Cheryl McCann's new book, "Stirring Up History."

Author Cheryl McCann holds her first book, “Stirring Up History.” The book pairs the recipes printed in the century-old “Presbyterian Ladies of Liberty Economy Cookbook” with biographies of the women who submitted recipes compiled by McCann over two years.

Cream puffs, created from recipes submitted by Katherine (Riley) Lawson and Gertrude (Peck) Dougherty for the 1880 and 1903 "Presbyterian Ladies of Liberty Economy Cookbook" are among recipes reprinted in Cheryl McCann's new book, "Stirring Up History."

Start with a love of history. Add a pinch of mystery, mix in a healthy dose of research and let simmer for two years.

While not an exact recipe, those are the ingredients Cheryl McCann used to print her first book, “Stirring Up History.”

A revised edition of the “Presbyterian Ladies of Liberty Economy Cookbook,” first printed more than a century ago, the publication shares “the meals, memoirs and memories of our ladies of Clay County,” pairing a reprint of the original book with biographies of the women who submitted recipes.

“This is an economy cookbook put out in 1880 and then again in 1903 by the Presbyterian ladies here in Liberty,” McCann said. “It was published by the Liberty Tribune and has all kinds of recipes and ads in here as well.”

The idea for the book came from a conversation among Clay County Archives and Historical Library volunteers, said McCann.

“Sitting here at a late-night Wednesday gathering, someone brought up the book and we asked, ‘Who are these people?’ Some were married to very prominent men in local history,” she said.

It was after that conversation McCann began retyping recipes and researching the individuals listed in the book.

“When you go through the book, it lists the women under their husbands’ names. A few unmarried women were referred to as ‘Miss,’ so we knew who they were,” McCann said, adding a handful were attributed only by their husband’s initials. “Some were very difficult to find out who they were. It was a lot of research on Ancestry.com and digging around the archives. We have been able to identify almost all of them.”

More than 100 women contributed recipes in the two editions of the cookbook. McCann said a majority were associated with the Presbyterian church, but at least one was Catholic. Additionally, several of the participating women attended Liberty Ladies College and two former slaves, Henrietta (White) Champ and Tabitha (Thornton) Hines, also submitted recipes.

“I feel like their story hasn’t been told,” McCann said of the women she researched. “You look around all these books (in the archives), and they’re about men. That’s not a bad thing. These women have their own take on things, not different, but an addition to what we know as far as history. I feel like I’m filling in a gap.”

While assembling the book, McCann cooked her way through the listed soups, meats, breads and desserts, though she admitted to skipping the recipe for calf’s head molded.

Her favorite recipe was for cream puffs submitted by Katherine (Riley) Lawson with cream filling from Gertrude (Peck) Dougherty.

Along the way McCann worked through the peculiarities of cooking in an era before electricity and running water, learning some recipes called for a tea cup of flour versus a traditional cup and the difference between baking in a cold (325 degree) and a hot (400 degree) oven.

“They had a different palate and different resources than we do today,” McCann said. “I’d have to look up other recipes or research to find some of the measurements or processes.”

An accountant by trade, the self-described accidental author said “Stirring Up History” came together with the assistance of archives volunteers Chris Harris, Tony Meyers and Steve and Carol Olson, and support from Phoebe Alpern, Kelley Wrenn Pozel and Nancy Gordon.

“It was fun to hear from Cheryl how she tried out these old recipes on her family. Since she started researching the book, I’ve seen the passion Cheryl has for shining a light on these women who were often only known by their husband’s name. I think these Liberty and Clay County women would be thrilled to finally be recognized as individuals after so many years,” said Wrenn Pozel, who helped with proofreading and editing.

Harris said the book added equity to the archive’s collection of books on the county’s history.

“Women did play quite a good role in the shaping of Clay County and Liberty, so I think it’s a very good balance,” he said.

The paperback is available for purchase at the archives, 210 E. Franklin St. in Liberty, or on Amazon.com for $19.95. All proceeds after costs will be donated to the archives.

County and Education Editor Ryne Dittmer can be reached at 389-6606 or ryne.dittmer@npgco.com.