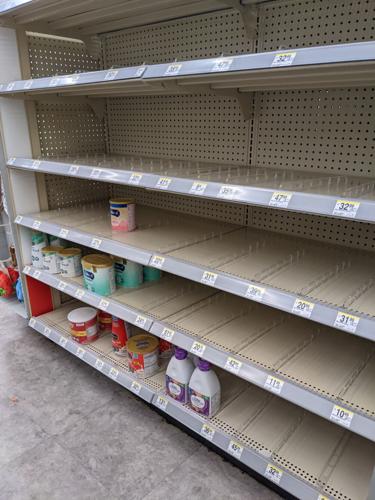 On Friday, May 13, store shelves normally full of infant formula like this one at Walgreens off West Kansas Street in Liberty were bare. 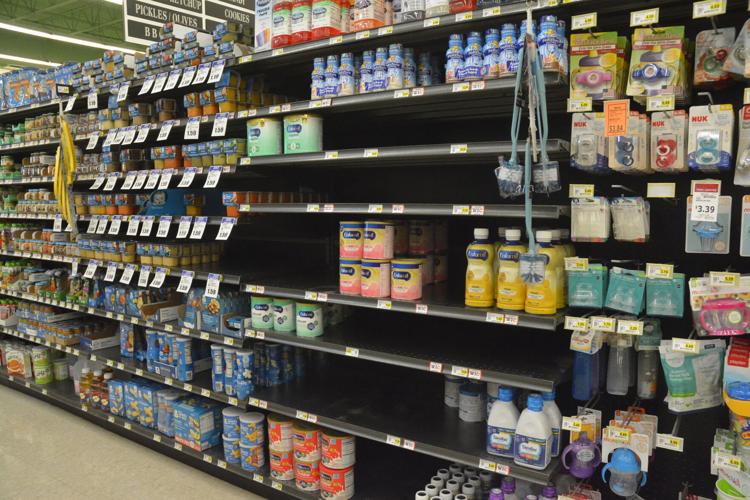 On Friday, May 13, store shelves normally full of infant formula like this one at Walgreens off West Kansas Street in Liberty were bare.

Missouri is one of six states where more than half of baby formula supplies are sold out. Across the Northland, retailers and families are struggling to get the formula products they need for their families. The result is many store shelves being nearly bare, and in some locations where supplies are available, purchasing limits are in place to avoid stockpiling.

“We cannot get any right now,” Kearney Price Chopper Store Director Kevin Norris told the Gladstone Dispatch Friday. “We order (formula) every night and we are just waiting for the manufacturer to come up with it.”

Norris said all Cosentino’s grocery stores are in the same boat in terms of little to no formula supply.

“We order through our warehouse and they are the ones that reach out to the manufacturer,” he said.

Bare shelves where also found Friday at other retailers like CVS in Kearney and Hy-Vee and Walgreens in Liberty and nearby Kansas City. At CVS, purchase limits of three per customer for products that are available are in place. AuBurn Pharmacy in Smithville does not sell formula. Summers Pharmacy in Kearney also does not stock the product.

At the Gladstone Hy-Vee location as of Tuesday, May 17, staff said store shelves were full of formula, but not of all brands and those for every dietary need.

At other Hy-Vees in the Northland, there have been shortfalls.

“Like other retailers, we continue to see sporadic outages of some baby formula brands across our stores due to the national shortage. However, we are working with our supplier partners to ensure we obtain as much product as possible for our customers, including the No. 1 WIC-approved Similac can formulation, which we do have in stock,” said Tina Potthoff, Hy-Vee senior vice president, communications.

Why there is a shortage

The shortage is being attributed to a variety of factors including inflation; supply chain issues related to scarce availability of ingredients and staff shortages that have made it difficult to get products out of warehouses; and a recent recall by Abbott Nutrition, the baby food manufacturer.

Abbott Laboratories, one of the largest manufacturers of baby formula in the country closed a manufacturing facility in Michigan in February after the Food and Drug Administration began investigating links between infants who contracted bacterial infections, including two deaths, after consuming formula from the plant. The recall included some Similac products.

In March, the FDA released initial findings of its investigation from inspections of the Michigan plant. According to the report, a history of contamination with the cronobacter bacteria — eight instances between fall 2019 and February 2022 — and a failure to maintain clean surfaces used in handling and producing the formula, were found.

“Abbott said in a statement last month that samples of formula from the Sturgis, Michigan, facility separately tested by Abbott and the FDA did not test positive for Cronobacter sakazakii or Salmonella, though the FDA noted in a statement that there were a limited number of samples tested,” states an article in Forbes magazine dated Thursday, May 12, that calls the shortage “a crisis.”

What local health authorities are doing

Clay County Public Health Center provides the WIC program to around 1,000 clients and currently 277 infants. WIC serves pregnant women, new mothers, infants and children up to age 5. About half of infant formula nationwide is purchased by participants using WIC benefits.

Lori Bunton, the county program manager of WIC, said the infant formula shortage has been a challenge.

The state, she said, has a contract with Similac, but due to the shortage, Missouri was able to put in waivers for other products.

“The scope of the recall was impactful,” Bunton said. “While we stress not switching a baby around on formula, we know we have to provide access to the alternatives. It’s a source of concern for parents and for us. We are working to keep the education and the conversations going on how babies are doing with any changes.”

Because of the fortunate ability to get waivers for others types of formula, Bunton said, currently no county family on WIC benefits is going without.

“It’s not only other formulas, but even other sized cans that have given options for families,” Bunton said. “I know that there is continual evaluation and availability of formula and that is taking place monthly. I foresee that the formula options will continue to be available until Similac is available for all clients. I’m guessing it will be several months.”

What families can do

Health care experts suggest families consult pediatricians to determine viable alternatives during the shortage and checking with loved ones in other parts of the country to see if supplies are available and can be shipped. Experts urge families to not try making their own homemade alternatives.

“What often happens in these situations is that parents find alternative methods for feeding, and for infants, this could be dangerous and should be done in consultation with the child’s health care provider. We understand that manufacturers are doing everything they can to increase availability of formulas, and they are working closely with the FDA to ensure these products return to shelves to meet the current demand,” said Paula Nickelson, acting director of DHSS.

“Many different brands of infant formulas are FDA-regulated and are safe to use for most babies. Call your pediatrician or primary care provider if you have any questions,” said Dr. Maya Moody, president-elect, Missouri chapter of American Academy of Pediatrics. “Always mix the formula as instructed on the can or bottle, and never add extra water to dilute the formula.”

Abbott Laboratories reported Wednesday, May 11, that it could restart production of infant formula at its troubled Michigan facility within two weeks. Abbott is restarting production of EleCare, Alimentum and metabolic formulas first, then Similac and other brands after receiving approval from the FDA in recent days. It’s estimated to take six to eight weeks before products return to store shelves.

The FDA reported it is also working with manufacturers to alleviate supply issues.

President Joe Biden also announced steps at the federal level being taken to help alleviate the shortage including cutting red tape to get more supply on store shelves sooner, calling on the Federal Trade Commission and state attorneys general to crackdown on price gouging and unfair market practices and increasing supply via increased imports.

“The U.S. normally produces 98% of the infant formula it consumes, and trading partners in Mexico, Chile, Ireland and the Netherlands are key sources of imports. But given the production and distribution issues leading to local short supplies of infant formula, the FDA will, in the coming days, announce specific new steps it is taking concerning importing certain infant formula products from abroad,” states a White House release dated May 12.

WIC services are offered at the Clay County Public Health Center, 800 Haines Drive, Liberty. WIC services are provided by appointment 8 a.m. to 4:30 p.m. Monday through Friday. Walk-in appointments are available for new mothers and babies on Monday mornings from 8 to 11 a.m.